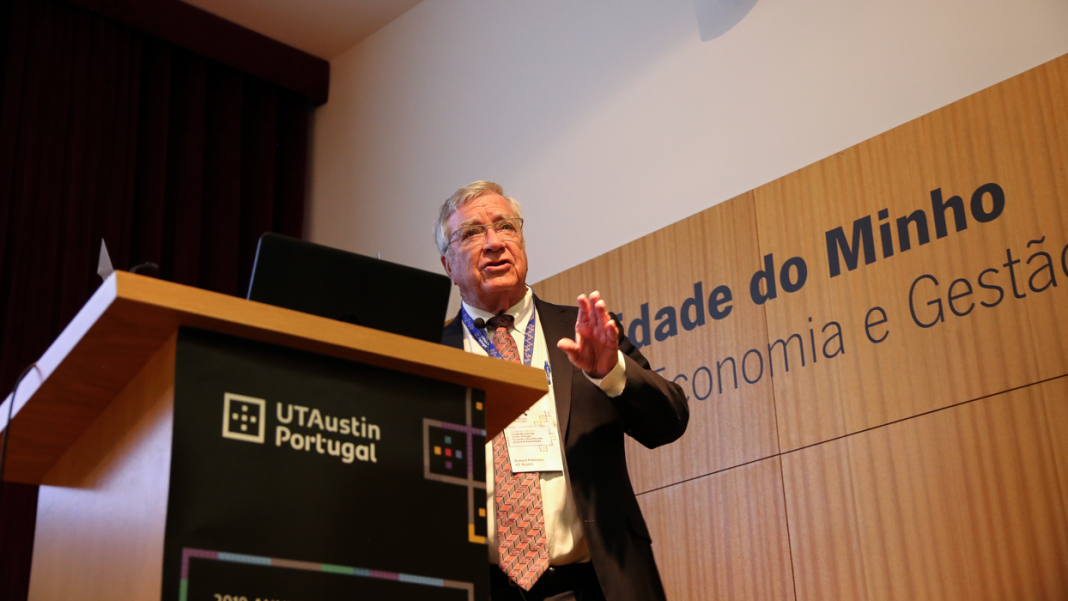 This year’s conference gathered top-class speakers from Portugal and UT Austin and had a stage for researchers to showcase their work and to network with peers from various fields and institutions.

On 20 September, the UT Austin Portugal Program’s 2019 Annual Conference was held at the University of Minho (UMinho), in Braga. Having entered its third phase in 2018, the conference was an opportunity to further introduce the scientific and entrepreneurial community to the five areas of the Program, through a central speech in the morning, a poster exhibition, and specialized Masterclasses on some of the latest research topics in the afternoon.

Over 100 attendees filled the auditorium of the School of Economics and Management, where the Rector of UMinho, Professor Rui Vieira de Castro, served as host. Talking about the importance of the Program for the country, which enabled the installation of the first supercomputer, BOB, in the Minho Advanced Computing Centre (MACC), UMinho’s Rector stated that he believes more exciting outcomes will arise from the Program.

Named after Robert A. Peterson – who was at the helm of the Program between 2007 and 2017 and enabled the transfer to Portugal of one of the most powerful supercomputers in the US for open science research –  current Associate Dean for Research in the McCombs School of Business at The University of Texas at Austin (UT Austin) and the author of the idea to bring BOB, Portugal’s first supercomputer, that will open a wealth of relevant opportunities for scientists and organizations. The supercomputer was provided to the Foundation for Science and Technology (FCT) by the Texas Advanced Computing Center (TACC) of UT Austin, within the framework of the UT Austin Portugal Program.

“This partnership is particularly relevant and mobilizing among other partnerships”, stated Rui Vieira de Castro.

José Manuel Mendonça, National Director of the UT Austin Portugal Program and John Ekerdt, Principal Investigator of the Program at Austin, followed on stage, discussing the mission and goals of the partnership that is moving forward. Nuno Feixa Rodrigues, Member of the Board of Directors of FCT, closed the opening remarks, emphasizing the partnership’s role in the national initiative INCoDe.2030 for the Digital Competences node.

On the basis of over 50 years of practice and study, the former UT Austin Portugal Program’s Principal Investigator, Professor Robert A. Peterson, gave his keynote speech on technology and innovation commercialization. On “Ruminations on Innovation Commercialization”, Peterson shared a series of personal stories and lessons learned, with solemnity and humor, from his early years as a professor at UT Austin to the practices in innovation commercialization and on how to become a successful entrepreneur. A Q&A followed, moderated by the National Co-Director, Rui Oliveira.

Afterwards, in a tribute to Professor Robert A. Peterson for his commitment towards the Portuguese research community, Manuel Heitor, Minister for Science, Technology and Higher Education, presented a plaque that will be displayed at the Minho Advanced Computing Centre, explaining Peterson’s importance to its installation, as well as distinguishing him with the Medal of Scientific Merit.

When discussing the significance of the supercomputer BOB, the Minister referred it as an “example of green supercomputing”, pointing out the possible applications of these machines in areas such as cancer cure and prevention, mobility, sustainability and climate forecasting.

A Poster Exhibition and Networking lunch followed, where 30 research teams had the opportunity to showcase current projects, within the five strategic areas of the Program: Advanced Computing, Medical Physics for Emerging Cancer Therapies, Nanomaterials for New Markets, Space-Earth Interactions and Technology Innovation and Entrepreneurship.

In the afternoon, over 50 participants attended the thematic Masterclasses at the Institute of Science and Innovation for Bio-Sustainability (IB-S), where experts from renowned institutions including UT Austin, UMinho, the International Iberian Nanotechnology Laboratory (INL), the Centre of Nanotechnology and Smart Textiles (CeNTI), Instituto Superior Técnico (IST), the Institute of Physics for Advanced Materials, Nanotechnology and Photonics of University of Porto (IFIMUP), Universidade NOVA Lisboa and RWTH Aachen University, presented their work and practical applications in matters of quantum computing and smart textiles.

The Masterclass I “Quantum Computing – Principles, algorithms and applications” coordinated by Luís Soares Barbosa, Professor at UMinho, aimed at introducing attendees to Quantum Computing’s principles and engineering, with tutorials and practical examples of its usage, including a demo on quantum computing with QISKIT.

Coordinated by the Nanotechnology area directors Carla Silva (CeNTI), Paulo Ferreira (INL) and Brian Korgel (UT Austin), the Masterclass II “Wearables and Advanced Textiles”, promoted a series of cross-talks where experts in various fields including Physics, Nanotechnology and Engineering, talked about the current trends in wearable fabrics and presented their approaches for the research, development and application of advanced, smart textiles.

The conference also served as the stage to introduce an upcoming new super machine, the Deucalion. “The aim is to have the machine installed and running by the end of 2020”, Nuno Feixa Rodrigues told the audience. According to Manuel Heitor, the “first-born” BOB, is currently subject to testing and is expected to be “open to the public” in January 2020.

Check out the full gallery of the 2019 Annual Conference here.

Browse through the exhibited posters here.

See below a short video recap of the day!