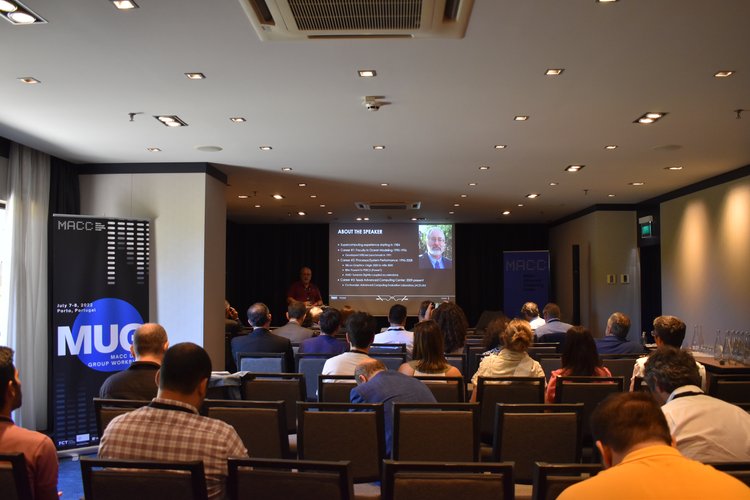 This year’s edition of MUG: MACC User Group Workshop, organized by the Minho Advanced Computing Centre (MACC), with the support of UT Austin Portugal, gathered around 70 people, from experts to users and potential users, to discuss topics related to High-Performance Computing (HCP) in Portugal and Europe, from green supercomputing to educational challenges in Advanced Computing. The event took place on July 7 and 8 at the Crowne Plaza Hotel, in Porto, Portugal.

This edition of MUG aimed to bring closer together MACC’s supporters, developers and users, who are unsurprisingly experienced and actively involved in the larger national, European and worldwide supercomputing ecosystems. The goal was to get them to look into the upcoming challenges of the HPC sector and how MACC and its community are preparing for them.

Among the panel of invited speakers were John D. McCalpin and Melyssa Fratkin, both from the Texas Advanced Computing Center of The University of Texas at Austin (TACC). John gave a talk on Energy Efficiency in Computer Architecture: From Transistors to Data Centers, while Melyssa focused her presentation on the Challenges of Industry Partnerships with HPC centres.

On the last day of the event, the Portuguese Minister of Science, Technology and Higher Education, Elvira Fortunato, was in attendance and closed MUG’s 2022 edition with a speech on green and sustainable computing and its importance to Portugal.

It is worthwhile remembering that the UT Austin Portugal Program’s collaboration with TACC was pivotal to placing Portugal at the forefront of research and innovation in the European HPC landscape through the creation of MACC. Thanks to the Program, in 2019, the country became home to one of the best-performing supercomputers in Europe, brought all the way from TACC to MACC. TACC’s Stampede 1 supercomputer, renamed BOB by the former Portuguese Minister of Science, Technology and Higher Education in honour of the Program’s former Principal Investigator at UT Austin, Robert A. Peterson, played a key role in Portugal’s successful application to host Deucalion, an even more powerful (and green) supercomputer that will push the envelope of the country’s computational capabilities in the European landscape.