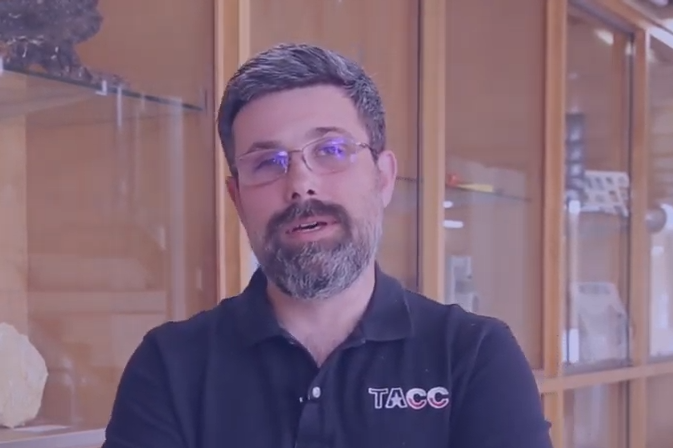 João Barbosa joined the Texas Advanced Computing Center (TACC) Scalable Visualization team in 2011 as a Graduate Research Assistant while pursuing a Dual Ph.D. at the University of Texas at Austin and the Portuguese MAP-i Program in High-Performance Graphics, under the UT Austin Portugal Program.

As a full-time Research Associate at TACC, João has worked in several Scientific Visualization (SciVis) projects ranging from high-level applications such as Gas and Oil to low-level high-performance software packages, in partnership with leading hardware and software companies. His current research focus lies in high-performance real-time in-situ photo-realistic ray tracing for SciVis. He moved back to Portugal last year and settled in Braga to join the Minho Advanced Computing Center (MACC) as a full-time researcher in Scientific Visualization.

Can you briefly explain the lines of your current job at MACC?

I’m currently the team leader for Scientific Visualization and High-Performance Computing (HPC). Besides the obvious research into these topics, I’m responsible for helping users bring their problems into supercomputing and help them properly use the available resources to scale their application and analysis.

Why does everyone talk about Scientific Visualization? What are its merits for scientists, but also for businesses and society at large?

The amount of data produced by a typical HPC application is so massive that analyzing and exploring them in their raw format is unreasonable. On the other hand, the human visual system has developed over millennia to spot patterns and find meaning in what we see from the world around us. Therefore, some form of scientific visualization has been around for as long as there is a scientific method, such as changing colors in chemical reactions, apparatus to measure physical quantities, etc. Scientific Visualization today is the extension of these primitive visualization methods with all the power of a non-physical representation, allowing researchers to quickly explore and find patterns within the data.

You switched from TACC to MACC. To what extent does your experience at TACC benefit your work at MACC?

My experience at TACC is one of the highlights of my career. Working at the best supercomputing center in the world dedicated to open science gave me the perspective of what MACC can be. All the skills learned developing applications and methods for HPC, especially large-scale Scientific Visualization, user support, management, teamwork, are now essential tools in my day-to-day work at MACC. Moreover, all the experiences allow us to mimic the work ethics based on the success of TACC and bring it to MACC work spirit.

When did you realize that average computers were not enough and wanted to work with supercomputers?

When we are passionate about science regardless of the topic, as I am, I soon realize that your desktop computer is not enough to tackle the problems that can impact society. We have to model climate change, handle significant physics problems, optimize and improve industrial processes, and scale up. And I wanted to be in the middle of it. I’m not a physics, chemist, or physician, but I soon realized, during my bachelor’s degree, that I could help them to get their models more efficient and to scale up into supercomputers.

How did you become involved with the UT Austin Portugal Program?

Early in the Program, there was a training section by TACC Staff in Portugal, in 2009, if I recall correctly. During that training, I talked with the staff, got involved with TACC, and started using their biggest system, called Ranger, through the UT Austin Portugal Program. From there, it was a dream ride. There was a chance for me to do a full summer internship at TACC through the Program. I got to know the Computer Science Department at UT Austin, got involved with their computer graphics group, and moved to Austin the next year as a Ph.D. student.

Do you think that the Program has facilitated your career progression? How?

Definitely, without the Program, it would have been challenging to start the path that I took 11 years ago, as the HPC area was almost non-existent in Portugal, so the Program did facilitate that.

What are your highlights of this journey with the Program?

Actually, the highlights are happening now. Being back in Portugal, having the chance to teach a new generation of computer scientists for HPC and SciVis, being able to help the Portuguese research community at large to bring their problems into a scale and level of detail that they did not think possible under shorter amounts of time… That is definitely the highlight.

What would give you a sense of accomplishment in your career?

Every time a research group sends me a “thank you” note saying that their research would not have achieved the level without my help. That is more important for me than having papers or awards. It means that science moved forward, even if for such a small amount as an atom of water.