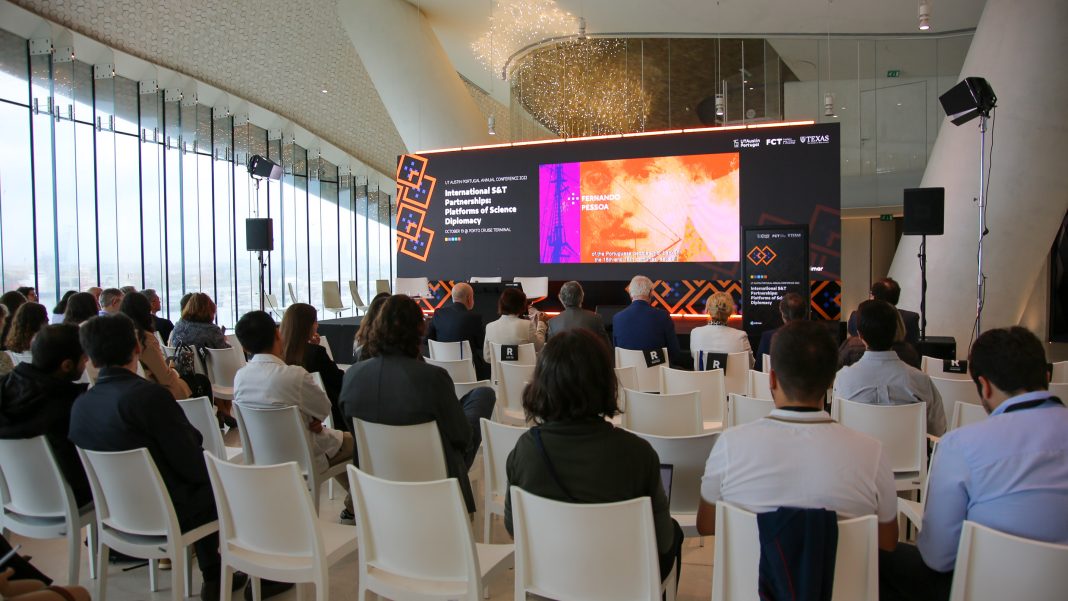 Throughout the year, we have been spreading how extraordinary 2022 is for the Program: fifteen years of a joint venture between Portugal and The University of Texas at Austin cannot be underestimated.

The culmination of this celebration took place on October 19 at the Program’s Annual Conference held at the Porto Cruise Terminal, home to the University of Porto’s Interdisciplinary Centre of Marine and Environmental Research (CIIMAR). Almost one hundred participants had the opportunity to learn from a group of top-notch speakers invited to share their views on International Science & Technology Partnerships as platforms for Science Diplomacy, reflect on the Program’s entrepreneurship legacy and its disruptive contributions to the biomedical field and ideate its role in society’s energy transition.

Science for the common good: the words from the Program’s Leadership, Government and national funding agencies highlighted the Program’s role in establishing connections between nations through science and technology

The morning began with the opening speeches of Vítor Vasconcelos (President of CIIMAR), José Manuel Mendonça (Program’s National Director), John Ekerdt (Principal Investigator at UT Austin), Madalena Alves (President of the Portuguese Foundation for Science and Technology) and Elvira Fortunato (Minister of Science, Technology and Higher Education). They all underscored the Program’s importance to scientific and technological development for the benefit of research communities, companies and society at large, evidencing the Program’s ability to connect with a broader ecosystem.

The enlightening quotes of the opening session

“…the ocean has no borders, except those that are imposed by anthropogenic needs and greed. (…) To tackle global changes and their mitigation we also need global responses and for that, obviously, we need diplomacy. A continuous and sincere dialogue and cooperation between countries and citizens is the only way to face challenges and to take opportunities to advance humanity and, especially, the sustainability of our planet.”

“I have always believed and still believe in the power that science holds to bring people and nations together to create knowledge for the common good.”

“I think that the importance of this partnership is that it is focusing on technological solutions for large societal problems. We make advances in these technologies and move society forward.”

“I believe these international partnerships contributed to step changes in some strategic fields and resulted in capacity building in those areas of research, development and innovation.”

– Madalena Alves, President of the Portuguese Foundation for Science and Technology

“Thanks to UT Austin Portugal Program we are being able to engage international research and innovation networks, promoting a highly qualified entrepreneurial culture in Portuguese institutions and enabling an expansion of an ecosystem to support research and development activities through national companies in close cooperation and coordination with academia.”

The motto of this Conference broken down by science diplomacy experts

The first roundtable brought together Elsa Henriques, Member of the Executive Board of the Luso-American Development Foundation, Amélia Polónia, Member of the Board of Directors of FCT, Tim Flink, Scientific Advisor to the German Parliament and Sona Ramesh, Economic Officer at the United States Embassy Lisbon. The panel moderated by Luís Lacerda, Policy Adviser at the University College London, brought to the audience’s attention the concept of science diplomacy and its connection with the Program. Some of the key messages provided by the guests were how creating science with impact is impossible when researchers shut the door to collaboration. In the era of globalization, transnational research is mandatory as societal issues, such as climate change, cannot be tackled alone and within a country’s own borders. Science diplomacy is crucial to breaking down barriers towards coordinated solutions between nations and ensuring a fairer distribution of resources that benefits developing countries.

The last session of the morning featured a keynote presentation by Nicholas Peppas – PI of the NxGNanoTher 2021 Exploratory Research Project and an awarded professor from the University of Texas at Austin in the field of drug delivery development – with the moderation of Helena Florindo, Group Leader at the Research Institute for Medicines and a PI of the same project. Peppas, who has been highly involved in UT Austin Portugal for a long time, talked about the Program’s contributions to Intelligent Biomaterials for the Treatment of Autoimmune Diseases and Cancer. Amid all the scientific advances mentioned by Peppas, which led to the expansion of the biomedical area, the professor highlighted the importance of several fields working together to solve important problems in medicine and nanotechnology and gave examples of how the Program helped connect people beyond the Partnership’s geographical scope, such as in the Interdisciplinary Training on Principles, Applications and Nanotechnology Innovation in Pharmaceutical Sciences, Biological Engineering and Medicine, in 2021.

The ups and downs of Entrepreneurship showcased during the afternoon roundtable.

The afternoon started with a look at UT Austin Portugal’s footprint in technology commercialization. Four entrepreneurs and technology transfer experts, Program’s alumni, went up on stage to give their insights on the ups and downs of entrepreneurship and academic research commercialization. Maria Oliveira, Business Director at the Science and Technology Park of the University of Porto, Verónica Orvalho, CEO of Didimo, Marta Catarino, Head of Knowledge Transfer and Innovation at the University of Minho and André dos Santos, Founding team and Vice-President of Strategic Business Development at SWORD Health, shared valuable insights on the many possible entrepreneurial journeys. Marco Bravo, the Program’s Executive Director at UT Austin, and himself an entrepreneur and technology commercialization expert, led the panel through an informal but rather juicy conversation packed with helpful, practical advice. Marco got to share his experience dealing with Portuguese entrepreneurs and the common mistakes they make when entering the US to fight for an opportunity. From this conversation, it was possible to highlight the Program’s role in providing tools for Portuguese entrepreneurs to step up their business approach to enter the US market. The panel also reminded us that a business idea, no matter how good it is, will hardly thrive if wannabe entrepreneurs are not focused, courageous, persistent, and truly passionate about pushing ideas forward.

The future of clean energy according to the experts: what does it hold?

Besides reminiscing about the past and present of UT Austin Portugal, this conference was also an opportunity to look to the future and how the Program can be a part of it. As climate change and energy-related topics are making the headline and shaping high-level agendas, the Program seized the opportunity to invite experts to bring their insights on the future of clean energy and the UN Sustainable Goals, with Adriano Cerqueira, Producer and Editor at “90 Segundos de Ciência”, as moderator.

For the future of decarbonization, electrification, along with the introduction of more renewable sources of energy and optimisation, were singled out by Brian Korgel, Director of UT Austin Energy Institute and one of the Program’s Area Directors for Nanotechnologies, and João Peças Lopes, Associate Director and Coordinator of the TEC4Energy initiative at the Institute for Systems and Computer Engineering, Technology and Science (INESC TEC) as necessary components of a broader strategy to achieve clean energy. However, the experts also argued that the electrification approach should be complemented with other methods since renewable energy storage is still a challenge that needs to be solved. Several storage methods are being developed, and the Program has been contributing through projects in that area. Additionally, hydrogen production towards a carbon-free future deserved the panellists’ attention, with them agreeing that decarbonization can go hand in hand with the needs of the industry and economy.

About Portugal’s ambitions, João Matos Fernandes, Professor at the University of Porto and former Minister for the Environment and Energy Transition, shed light on how the Portuguese Government plans to reach the goal of 80% renewable-based energy consumption earlier than 2030, i.e., by 2026. Fernandes also mentioned that it may be possible for Portugal to become carbon neutral by 2050.

Wrapping up with an eye to the future

Joana Mendonça, President of the Portuguese Innovation National Agency (ANI), wrapped up the conference. On stage, she underscored the importance of collaborating and having a multidisciplinary approach to complex global challenges and was very clear about ANI’s standing on S&T partnerships:

“Our vision at the innovation agency is to transform the future, making the future today by transforming the economy through science… I believe our future has to be built and supported by partnerships like this one.”

From the lab bench to the screen: the E-Poster Gallery showcased the researchers’ scientific contributions to the Program’s community

The Conference offered a venue for younger researchers to display their research side by side with more senior peers at the Conference E-Poster Gallery. Two touchscreens strategically located at the entrance of the Conference room sparked participants’ curiosity: they gave a glimpse of research work being undertaken across four scientific areas of the Program. Of the thirty-six posters exhibited, nineteen highlighted results of exploratory and strategic research projects bearing the Program’s seal in Phase 3.

Check out the Conference’s photo gallery